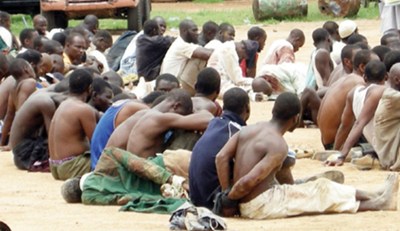 A wanted terror suspect was among the 486 suspects arrested in Abia State on Sunday, the Defence Headquarters has said.

It also said other security agencies and para-military organisations had joined the ongoing screening of the arrested suspects.

The Director of Defence Information, Maj.-Gen. Chris Olukolade, in a statement last night in Abuja, said:

“A terror kingpin on the list of wanted terrorists of security forces in Nigeria has been detected in the ongoing screening of the 486 suspects nabbed while travelling in over 33 Hiace Hummer buses at night along Enugu-Port Harcourt Expressway last Sunday.

“So far, other security agencies including the para-military have joined the screening exercise to ascertain the status of the remaining suspects.

“Those identified as possible security risk or illegal immigrants are expected to be identified for further action”.

Olukolade added that the identified terror kingpin has been taken into custody.