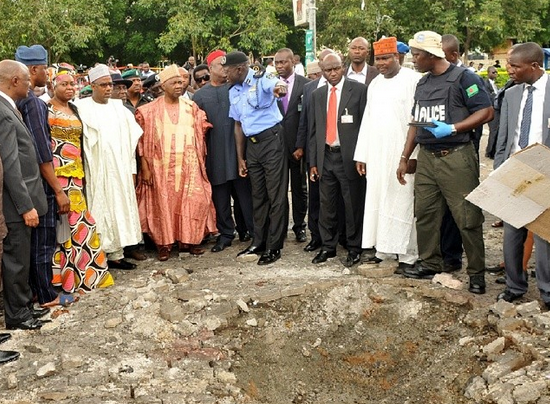 Vice President Namadi Sambo, on Thursday, was at the scene of Wednesday’s bomb blast at Emab Plaza, Wuse II, Abuja, which claimed lives of at least 21 persons and wounded many more, declaring that the President Goodluck Jonathan administration would not rest until Boko Haram is defeated.

He said the terrorists could not dampen the spirit of Nigerians with their evil acts, even as he expressed confidence that terror would never gain ground in Nigeria or anywhere else in the world.

He also sued for cooperation with security agencies as they tackle crime and criminality in the country.

According to Sambo, “this cowardly and unjust act will be defeated.  Evil can never be sustained. This administration and Mr President will not leave any stone unturned until we defeat these terrorists. Terrorism cannot survive in Nigeria or in any part of this world”.

The vice president, who led members of the Federal Executive Council (FEC) to the scene of the blast, later visited recuperating victims at the Maitama District Hospital.