Charly Boy has revealed why he left the venue of his late father’s lying-in-state, abruptly.

This move shocked many people present, including Governor Rochas Okorocha, the national chairman of the All Progressives Congress (APC), Odigie Oyegun, members of state executive council and many others.

All the people were seated inside Owerri International Conference Centre, when Charly Boy suddenly walked out the venue. This move made many attendees speechless and with many questions on their minds.

Some people alleged that the Area Fada had walked out of

the conference centre to attend to a short-term personal issue, which required his presence outside the hall in person.

Charly Boy told his security, cameramen and aides inside the hall that he was done with the event and ordered them to follow him immediately.

According to Nigerian Tribune, Charly Boy made the decision when the service had nearly turned into some sort of a political rally.

The entertainer was far from being happy with the development as he was angered by the fact that the lying-in-state was heading in the wrong direction, and was not about commemorating for his father, but more about politics.

Pro-Okorocha people and many APC supporters besieged the venue hours before the arrival of the state governor. They were dancing and singing as they awaited him.

Governor Okorocha came into the venue amid cheers from the people. In his speech, he eulogised the late Oputa, described him as a man of high integrity, who, until his death, did not compromise on what he stood for.

Charly boy was also annoyed by the late arrival of Imo State Governor and his team to the venue. This caused a significant delay in the start of the event. 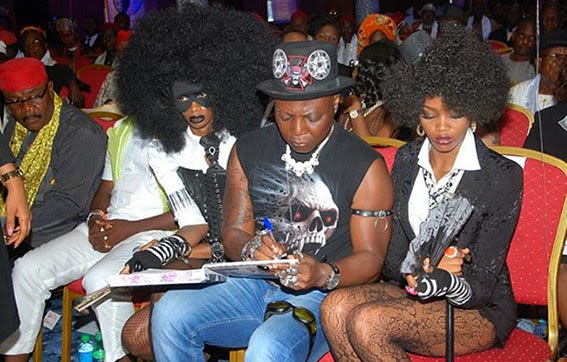 Charly Boy at the event