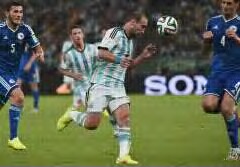 Argetina defender Pablo Zabaleta has warned his side that there is no margin for error as they prepare for their World Cup last 16 clash with Switzerland.

The Albiceleste clinched top spot in Group F thanks to a 3-2 win over Nigeria, setting up a date with Ottmar Hitzfeld’s side in the next round following their 3-0 win over Honduras.

Zabaleta has now warned that their path to the final would only get harder from here after watching a number of sides pull off unexpected results in the tournament so far.

“Now we have a match of life or death, because if you make mistakes, it can be your end,” he said.

“The group matches were hard, against teams that made it tough against us. Of course, we have in mind that we want to keep improving, let’s hope we can manage it.

“It’s a very even World Cup. Some teams held as favourites have left at the first stage. It hasn’t been an easy tournament.”

Zabaleta was still pleased that his team had managed to finish first in their group and took the time to praise Nigera, who will also compete in the next round.

“It was very important to win all three matches, our confidence is a little higher now. But to finish first was even more important, that was our goal from the start,” he added.

“Nigeria has really good players, who play well as a team. And that’s why they finished second, and we wish them the best.”

Meanwhile, midfielder Javier Mascherano downplayed concerns over Argentina’s defence after they conceded two goals against the Super Eagles, though he conceded that the best was yet to come from his team.

“Honestly, I think both their goals were much more because of their individual quality than our defensive instability,” he said.

“They didn’t have many goal opportunities. They were closer to our goal in the second half, but still no goal situations.

“I think we were better than the Iran match. Now we must think about the round of 16 because there are still many more aspects where we could improve our game.” {GOAL}