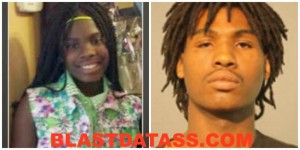 An 18-year-old boy, by the name of Tevin Lee, shot and killed 11-year-old Shamiya Adams while she was attending a friend’s slumber party.

A stray bullet hit Shamiya and sources say the reason Tevin fired in the first place was to get revenge for a friend who was beaten up.

This situation took place on the July 18th, 2014 when Shamiya Adams was at a friend’s house in the Garfield Park neighborhood, peacefully enjoying her short-lived childhood. Shamiya Adams was pronounced dead the next day at Mount Sinai Hospital. Tevin Lee is retarded because the gangsters told him his target wasn’t even in the area.

Tevin Lee’s godfather is trying to take up for him because he doesn’t think his godson fired the fatal shot. His godfather claims Tevin is a high school graduate, and also happens to be in an active church leader. Tevin also currently had a job as an elementary school teacher’s assistant.

Prosecutors said that around 9:35 P.M. on July 18th, Shamiya was inside her friend’s house at a sleep over, when a bullet came through the window and hit her. Prosecutors said a 14-year-old friend of Tevin’s was thrown off of his bike by some gangsters. The boy who got beat down told Tevin Lee and some other family members what happened.

This led Tevin Lee to go to the scene of the fight with a loaded gun. The boy who got beat of said Tevin starting shooting the gun even though nobody was around. One of the bullets randomly fired ending up killing Shamiya.

The head of the Chicago Police Department said the gun has not been discovered. Tevin Lee supposedly told witnesses he “HID” the gun. The godfather agreed that Tevin Lee went there to fight for his buddy, but he didn’t have a gun on him at the time.

He said the boy who shot the gun was let go by the police. Prosecutors said the neighbors identified Tevin Lee as the shooter. The head of the Chicago Police Department stated this is what happens when you bring weapons to fist fights.

The head of the Chicago Police Department said he is sick of the kid on kid crimes in Chicago. He related this situation to the girl who shot another girl over a Facebook argument. This world is truly going under.