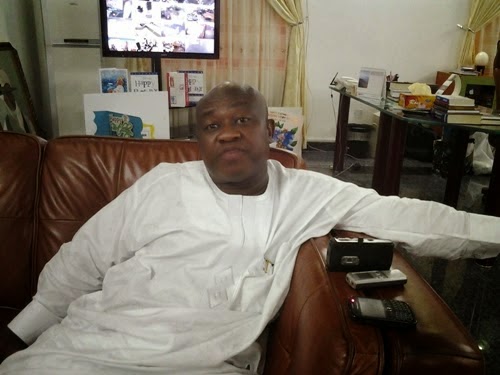 The founder of LEADERSHIP Newspapers Group Limited, Mr Sam Nda-Isaiah, yesterday took his presidential campaign train to the Redeemed Camp, along Lagos-Ibadan expressway, where he met the general overseer of the Redeemed Christian Church of God, Pastor Enoch Adeboye.

Mr. Nda-Isaiah, who has declared his interest in the 2015 presidential race, is seeking to clinch the ticket of the All Progressives Congress (APC).

The presidential aspirant met with the highly respected cleric behind closed doors and after the meeting, disclosed that he was at the RCCG camp to pay homage and consult with Pastor Adeboye over his ambition.

He stated: “As part of my consultations, I am still going round seeing the leaders of the country to tell them why I want to lead the country, and, of course, this is one of such right places, and that is why I am here. I have come to discuss with Pastor Enoch Adeboye as you saw.

“It was a very private meeting. This is just consultation and we know the place of Pastor Adeboye in Nigeria. Even Time magazine has mentioned him as one of the most influential people in the world. So it should not be surprising that this is one of the places that I must come to. That is why I have come”.

The publisher said though he sits atop a conglomerate that pays legitimately more than the Presidency, the desire to reposition the country formed the basis for his interest in the presidential race.

Nda-Isaiah said: “Right now, nothing is being done right in Nigeria; everything is being done wrongly. As we speak now, the most elementary duty of government which is to provide security for its people – in fact, that one is not in manifestoes because it is beyond politics – is not being achieved.

“The whole nation is in disarray. As we stand here now, we are afraid of going to the churches, we are all afraid of going to the mosques, we are not to go to the market or send our children to school. Nigeria is technically a failed state. Like I keep saying, we are just lucky that with our size and resources both human material and natural we can reverse it now. We shouldn’t wait to get to a point when it is no longer reversible.

“Nigeria is in a state of emergency now and we need to rescue it. That is why I am in the race”.

Looking forward, he explained, “our campaign will stand on two legs. First, we are going to unite this country as quickly as possible to form a nation because we are not a nation. I have never seen a nation so divided and hopes to make progress”.

The founder of LEADERSHIP continued: “We must, as a matter of urgency, come together to form one strong united Nigeria, and that is very possible. The reason we are not united is lack of justice, fairness. And the way we are led will always lead to divisions. A leader that wants to unite a country can do it easily: You do not need a budget to do that; all you need to do is be sincere.

“You have to ensure that there is justice, fairness and charity. If you treat members of the country, the whole nation, the way you treat your family as the head of the family, everybody will be fine. That is the first thing”.

He said the second priority will be to quickly stabilize the country and bring order to the nation, noting that the country is in total disarray.

“Not just in the north-east; recently we heard that an uncle to the president was kidnapped, because of the kidnapping in south-south and south-east parts of the country, nobody wants to go there.

“I have friends in the south-south and south-east who do not go home for holidays. They prefer to stay in Abuja. Even in Abuja now, people are afraid to stay there because of what has been happening”.

When given the opportunity by Nigerians, he said, he and his team will run a government of big ideas: “It is only big ideas that will change the course of history and that will transmit Nigeria from a Third World country to a First World country. That is possible”.

Nda-Isaiah lamented that a group of thugs under the guise of Boko Haram sect was able to overrun the nation’s security apparatus because of the high level of corruption, stealing and mismanagement of public funds in the country.