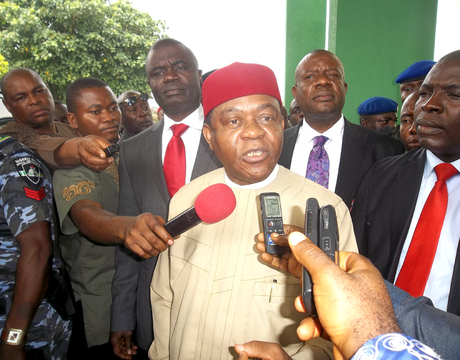 Abia State Governor, Theodore Orji, has declared that he has no regrets for his continued support for President Goodluck Jonathan, saying his support is not cosmetic but total.

Speaking on Friday in Umuahia, the state capital, when he received in audience the South East delegation of  ‘Goodluck Support Groups’, Orji also urged President Jonathan to declare his intention to seek re- election in 2015.

He said, “My support for Jonathan is total and not cosmetic, and we want him to make known his intention to run in 2015 because we will replicate the total support we gave him in 2011.

“Even though he has not declared it, I will not stop supporting him because I know that he has all it takes to fix Nigeria despite the daunting challenges”.

Gov. Orji admitted that the president was currently faced with “a lot of problems, particularly insecurity”, but expressed optimism that he (Jonathan) would steer the country’s ship of leadership to a safe anchor.

Speaking Earlier, leader of the delegation and National Director, Contact and Mobilisation of the group, Chief Perry Opara, said the group was in the state to strategise on how to deliver the entire South-East to Jonathan as was the case in 2011 when he eventually declares interest to re-contest.

Later in an interview with journalists, Opara said he would be disappointed if “Jonathan fails to seek re- election”, adding that “the coast is clear for him to sweep the poll”.