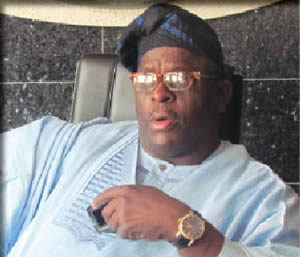 Ahead of the 2015 general election, the Ogun State chapter of People Democratic Party (PDP) has denied the existence of a working arrangement between it and the Labour Party (LP).

The sole financier of PDP in Ogun and Chairman, Organisation and Mobilisation Committee, PDP, South West, Prince Buruji Kashamu, who made the party’s position known yesterday in a statement, said that former Governor Gbenga Daniel was a spoiler who betrayed the PDP.

Mr. Daniel, who defected from PDP to LP, was recently quoted as saying both parties would work together in 2015 to send Governor Ibikunle Amosun packing from Government House.

But Kashamu debunked the claim saying any plans of an alleged working arrangement between the two parties were ill-motivated.

He said: “As a leader of the PDP in Ogun State and Chairman, Organisation and Mobilisation Committee, PDP, South West, I wish to state that this statement is part of the grand plot by Daniel to hoodwink and mislead the good people of Ogun State.

“He has had his time when he ruled the state for eight years and simple discretion would require that he quit the stage, or at best, play the role of an elder statesman. But since he has elected to continually play the spoiler, he should be told in unmistakable terms that so long as he continues to play his divisive politics of promoting LP, he should leave PDP out of his political flirting.

“It is the height of betrayal that someone who rode on the platform of PDP to political prominence would want to undermine the same party because of his own selfish interest and over-bloated ego.

“He wants to be the Alpha and Omega of any political party he finds himself. That is why he has sidelined the authentic Olabode Simeon-led State Executive Committee of the Labour Party in order to impose his stooges and puppets on the party. He has carried on with the same reckless abandon that was his undoing in spite of a subsisting court injunction that status quo should be maintained in the dispute that arose over the Labour Party structure. I wager that this is a potential landmine that many have not averred their minds to”.

Kashamu said it was “incongruous and inconsistent that someone who claims to have left the PDP and is now in LP” would want to work for a PDP candidate at any level.

“If PDP is not good enough for him to be part of, why work for its success and that of its candidates at any level? One would have expected him to remain in his Labour Party and leave us alone in PDP.

“He cannot be in LP and be talking of collaborating with PDP for any election. It is mischievous, to say the least.

“If he is mouthing this in the hope that it could give him some soft-landing in his ongoing trial over his alleged involvement in criminal diversion of funds and conversion of land belonging to the Ogun State government for private use, then he is mistaken”, the statement added.