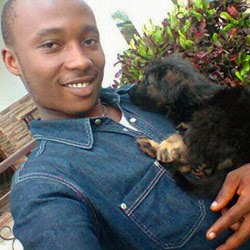 It’s very sad to hear news like this,  young man with so much ahead of him would kill himself just because a girl dumps him; it’s really sad.

The 21-year-old boy named Effiong Otu, a student of Maritime Academy Oron, has committed suicide on Thursday, 10th of July, 2014 because his girlfriend jilted him.

Ironically, the 10th of July was also the 10th anniversary of his father’s death in a car accident. After the family prayed and marked the anniversary, his mother left for work.

Effiong later went to one of their neighbours to borrow a rope, locked his room door and committed the act. Before neighbours could figure out what he did with the rope, he had already hanged himself. His room door was later forced to open, and they met his body dangling from the rope he had used for the suicide.

One of his friends who also rushed to the scene said the 21-year old called him before committing the act, that he should tell his girlfriend, blessing, that she should now be happy that he has killed himself for her.