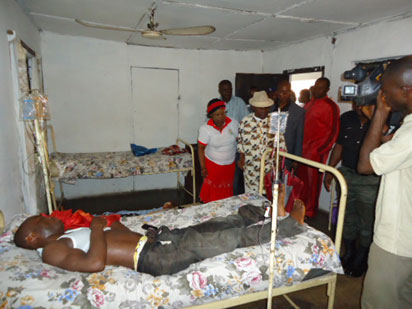 Survivors of the carbon monoxide inhalation incident at a prayer vigil in Aba, Abia State, during the weekend have recounted their experiences.

The survivors are now recuperating at the Austin Graces and Goodness and Mercy Hospital on Okigwe Road, Aba.

Fifteen of the 16 people, who had gone for the prayers on Eziukwu Road on Friday, were found unconscious on Saturday, while one person died in the incident.

Uchechukwu Sylvester, one of the affected persons, narrated his experience in an interview from his hospital bed.

“It was Friday night and we went for tarry night at Eziukwu road. I can tell you that we started the prayers by 10 p.m.

“At a point, our coordinator took the microphone and rounded off the prayers after which he himself fell down to the ground.

“That was all I knew until I saw myself in this hospital on Sunday being fed by one of my brothers with rice,” he said.

He praised God for bringing them back to life.

Another victim, Mary Nwankwo, who suffered ear blockage in the incident, said she was getting better.

Giving his own account of what happened, Kalu Ogbonnaya, a fashion designer, said that they were praising God during the prayer meeting and all of a sudden, one of them fell flat and did not move his body.

Soon, another person fell to the ground and others followed one by one but they never knew what was happening to them.

He, however, said that they suspected it was the Holy Spirit moving in their midst.

He said he soon became weak and fell down and wanted to vomit but could not, adding that that was all he knew until he woke up in the hospital the following day.

Mr. Ogbonnaya thanked God for saving their lives from perishing at an all-night prayer meeting.