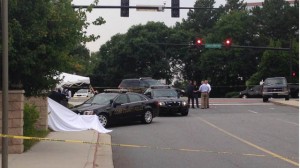 A 10-month-old Kansas girl died after being strapped for more than two hours inside a sweltering car, and police arrested a foster parent who said he’d forgotten about her until something on TV jogged his memory, an official said Friday.

The 29-year-old man was booked on suspicion of aggravated endangerment but has not been charged, said Lt. Todd Ojile of the Wichita Police Department. The case will be presented early next week to prosecutors.

The girl’s distraught maternal grandmother, Cindy Poe of Topeka, Kansas, went to police headquarters Friday demanding to see her granddaughter’s body and to find out where her other two grandchildren had been taken.

“I want answers,” Poe told The Associated Press. “I want to know why my grandbaby was in that car.”

The investigation found that the girl was picked up from the baby sitter around 4 p.m. Thursday and brought home, where she was “somehow forgotten” in the back seat of the car in Wichita, where temperatures were around 90 degrees. The foster parent went inside the house with a 5-year-old child who had also been with him, but left the baby strapped in the car seat in the parked car outside the house.

The other foster parent in the house at the time, his 26-year-old partner, was in the backyard when they came in. No charges are expected against him, Ojile said.

“He believed all the children were downstairs playing,” Ojile said. “He did not know the child was outside.”

Both realized at the same time the baby was still in the car when “something on TV” jogged their memories, Ojile said, without elaborating.

The couple then ran outside the house and found the girl inside the car, still strapped in her car seat. The car’s tinted windows were all up.

Emergency dispatchers got a call at 6:41 p.m. Thursday, and the girl was pronounced dead at the scene a few minutes later.

“Both were extremely upset,” Ojile said of the foster parents.

On Friday, The Kansas Department for Children and Families suspended all future child placements with its former foster care contractor, TFI Family Services, pending the outcome of an investigation. The agency’s contract with the state was not renewed in 2013, but TFI had still been allowed to sponsor some licensed foster homes. The agency also ordered its foster care contractors to inspect all foster homes associated with TFI.

TFI spokesman Branden Long said the company is cooperating and does not believe there are any issues with its foster care services. The agency emailed a statement late Friday saying it was “deeply saddened” by the death. It said it has provided heat safety tips to its foster families and will be contacting each one personally as part of its commitment to ensuring children cared for by its sponsored foster families are safe.

“I want to assure Kansans that we are doing everything we can to uphold our agency’s mission to protect children,” Department for Children and Families Secretary Phyllis Gilmore said in a statement. “Children in need of care deserve safe, loving homes.”

According to the nonprofit child safety group KidsAndCars.org, 18 children have died in hot cars this year in the United States, including a Georgia boy whose father is charged with murder on suspicion of intentionally leaving the 22-month-old in a hot car last month as he went to work.

The Kansas City, Missouri-based group said 10 children have died in hot cars in Kansas since 2000.