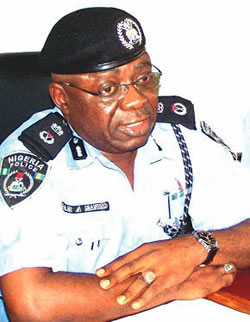 The State Police Commissioner, Umar Manko, told leaders of the Victoria Island community at a meeting weekend that the value of investment in the area cannot be over-looked hence the need for the community to be alert at all times.

“We have been on top of security situation in Lagos. Victoria Island had recorded low crime rate in recent time.

“After the explosion in Apapa area of Lagos that Boko Haram claimed responsibility, the need for more enlightenment on security became necessary. I don’t want us to take the issue of Boko Haram’s claim for granted. The police and other security agents cannot do it alone.

“We must be at alert. We have all the headquarters of banks and other big companies in this area. We need to secure our residents and offices; watch the people around your homes; report to security people any strange object, vehicles and persons.

“This meeting is not to create panic but awareness of the time we area in. Terrorism is a global problem. Many countries have been facing the problem before it came to Nigeria, we must stand against it. If you see any strange bag, vehicles, can, cable connected material, don’t go close. Monitor the entering into the home and offices, control access to your building, car parks. Introduce screening devices, although, they are expensive, but not to the security of our lives and property. We should also take special note of our domestic workers. Hotels, eateries and cinema centres must employ all security measures. Nobody is too big to be screened into your building”, Manko said.

The Chairman of Iru/Victoria Island Local Community Development Area, Mr Abayomi Daramola, urged all landlords with private guards to register them with immediate effect as part of security measures in the area.

Daramola, who noted that 60 per cent of Victoria Island houses had been turned to commercial centres, warned that any private guard who is not registered, would be arrested by the council’s task force.

He also stated that the council was working with the Ministry of Physical Planning to ensure that all vacant plots of land were taken care of by their owners to avoid them being used as hideout for criminal elements.