Home Politics APC Should Be Held Responsible If Anything Happens To INEC Offices In...
Facebook
Twitter
WhatsApp 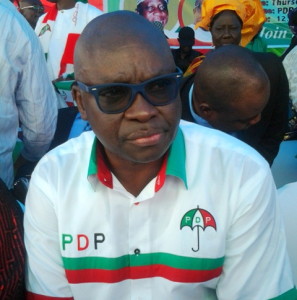 The Ayo Fayose Campaign Organisation (AFCO) has urged Nigerians, especially the security agencies, to hold the All Progressives Congress (APC) accountable, if anything happens to the Independent National Electoral Commission (INEC) offices in Ekiti State.

Reacting to allegations by the APC that the Peoples Democratic Party (PDP) in conjunction with the governor-elect, Mr. Fayose are planning to burn down the state INEC office in order to destroy evidence that could rubbish the general belief that the June 21 governorship election in the state was free, fair and credible, AFCO, in a statement issued by its Director-General, Dipo Anisulowo, said “APC members should not be allowed to burn the INEC office in Ado-Ekiti the way they burnt the INEC office in Ido-/Osi Local Government, during the 2009 governorship rerun”.

“If they are saying that plans are being hatched for ‘strange fire’ occurrence at the INEC office in Ado Ekiti and all the materials relating to the just concluded governorship election will be burnt, security agencies must ask questions.

“This is more so that the APC spokesperson, Mr Segun Dipe, who issued the statement on Wednesday, also knew that the fire incidence would be blamed on some faulty power surge, he (Segun Dipe) must be made to give further details on the alleged plot”, AFCO said.

Anisulowo said the modus operandi of the APC and its members is to accuse others of planning to do what they have already set machinery in motion to do.

He added that “It is obvious that the APC as a party has tried to discredit the June 21 governorship election, by inventing various arguments, including claim that the election was photocromically rigged.