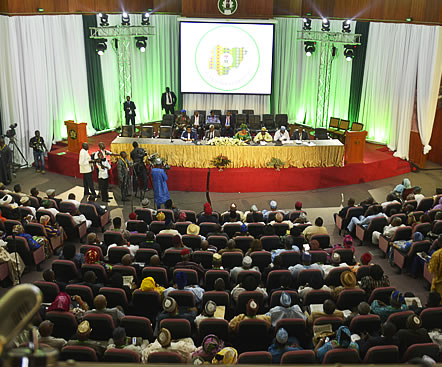 As the National Conference winds-down, a major crisis that might bring all the progress achieved so far to naught is brewing as the North is threatening to pull out.

The northern delegates have reportedly made their position known to the conference chairman, Justice Idris Kutigi (rtd) and his deputy, Prof. Bolaji Akinyemi.

The North is demanding a nullification of all resolutions so far taken through voice vote, which they said did not reflect the views of delegates.

Their latest position is coming on the heels of the conference’s adoption of the recommendation of an additional state for the South-East zone to bring it at par with other geo-political zones in the country. The recommendation was unanimously endorsed.

But in what looked like a volte-face, the North is now insisting on “a proper ballot process” and queried why the conference’s leadership refused to use ballot boxes and papers already with the secretariat.

They accused the leadership of alleged “floundering” on resolutions.

The Northern Delegates Forum (NDF) are reportedly going to hold an emergency meeting at Gombe Jewel Hotel in Abuja to determine whether to continue to be a part of the conference or boycott it.

The displeased delegates met with Justice Kutigi and Akinyemi at the weekend.

It was learnt that the delegates were unhappy over the conference voice vote resolutions on state police, rotational presidency, adoption of six geopolitical zones, deletion of local government from the Federal Constitution, nature of federalism to be adopted by the country, among others.

A source said: “After last Thursday, session, the Northern delegates issued a communique rejecting all resolutions/ decisions so far taken by the National Conference because they came about through voice vote.

“They alleged that sometimes, when the nays had it, the leadership will turn the result for the ayes.

“They then sent the delegation to Kutigi and Akinyemi to revisit the resolutions by allowing members to vote through the ballot process.

“They are demanding outright voting process on all issues to make the resolutions true reflections of the choices of delegates. They asked for the reopening of all issues”.

It was gathered that the conference leadership pleaded for understanding and assured the delegates that their complaints would be looked into.

“The leadership agreed that without physical counting, there was no way it could determine the real resolutions of delegates”, the source added.

A member of the National Conference, Dr. Junaid Mohammed, confirmed the development.

He said: “This protest was not the first time that delegates from the North will raise issues with the leadership of the conference. But the audience with Kutigi and Akinyemi last Thursday was the icing on the cake.

“I think Kutigi and Bolaji are behaving as if they have an agenda. Before we started, we had to adopt our rules. The government came up with a recommendation that for a resolution to subsist, it will require the consent of 75 per cent of the delegates.

“But, in the course of debate at the conference, it was reduced to 70 per cent. We agreed to bring down the threshold after two or three attempts at a consensus. Unless we have a physical count, there was no way to determine that all the resolutions allegedly taken had the consent of 70 per cent of the delegates.

“Any time there was a voice vote, the leadership gave a wrong verdict. For instance, while considering the report of the Committee on Restructuring, I stood up to raise observation on the voice vote but it was not allowed. They get the ayes and the nays of the North wrong”.

Meanwhile, the concluding sessions of the Conference, which begin today, are likely to be heated as the gulf between the northern and southern delegates has widened.