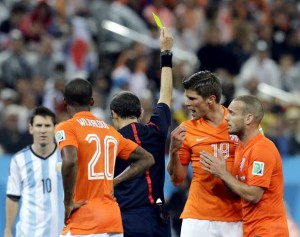 Think Neymar’s fractured vertebra is the worst injury of the World Cup? Think again. His busted back has been overshadowed by a real a**hole.

Literally, as in, a torn anus, suffered by Argentina’s Javier Mascherano during Wednesday’s victory over the Netherlands.

Mascherano sustained the gruesome injury at the tail end of regulation play, when he stretched to block a potentially game-ending shot on goal by Dutch player Arjen Robben.

“I thought I had slipped, I thought I wouldn’t make it, but I tore my anus on that move, the pain … it was terrible,” Mascherano said in a post-game interview translated by The Independent. “I threw myself into it. I could have been sent off. It could have been a penalty but anyone could have done that, I had the luck to get there.”

Earlier in the match, Mascherano knocked heads with another player, collapsed, and was helped off the field, only to return 2 minutes later, leading many to speculate he’d also played through a concussion.