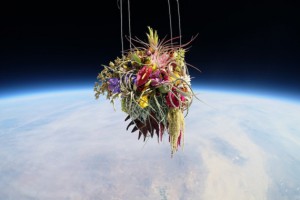 We’ve heard that outer space is, visually speaking, a pretty majestic experience. Yet although the galaxy beyond is undoubtedly filled with stars and misty clouds for days, there aren’t any decorative touches around to spruce up the space.

Enter Tokyo-based artist Azuma Makoto, aka the official interior decorator of outer space. For Makoto’s recent artistic endeavor, entitled “EXOBIOTANICA,” he launched a 50-year-old Japanese white pine bonsai, along with an arrangement of orchids, hydrangeas, lilies and irises, into the great beyond.

The carefully arranged greenery was expelled from planet earth from Black Rock Desert, Nevada — also the location of the Burning Man Festival. The whole project was taped, thanks to the six GoPro cameras strapped to the balloons which carried the plants. As you could probably guess, the juxtaposition of crisp floral arrangement and the empty wilderness of outer space is a surreal sight to behold.

“I went to Amazon, Brazil last year and created art pieces with plants that were full of aliveness in dense forest where I could hear groan from the earth,” the artist explained to the Huffington Post. “This was a mind-blowing experience since I really felt that I was arranging the plants onto the earth. For this EXOBIOTANICA project, one of my inspiration sources was curiosity – I asked myself, ‘what would it happen when I arrange plants on the globe, from up in the sky?’ as a concept that is completely opposite of what I did in Brazil.”

The goal was simple: “I wanted to explore how flowers and plants would bloom, decay and change outside of the earth. I wanted to seek and tell how their beauties will look with the earth as its background.”

Before actually launching the flora into outer space, Makoto, in collaboration with John Powell of JP Aerospace, “experimented number of times under low-temperature and did rehearsals for camera’s angles beforehand so that we would able to estimate what would happen to some extent.” Despite all the preparations that took place, nothing could predict the staggering beauty that results from the strange and enchanting vision of a domesticated floral arrangement floating through the unbridled Milky Way.

Now that he’s tackled outer space, Makoto has set his sights on artistic destinations closer to planet earth, though just as visually compelling. “For the next steps I would like to try various conditions such as the bottom of the sea, volcano, the Arctic and the Antarctic to see what kind of expressions flowers and plants would display. These challenging concepts make me excited by only thinking about it.” We cannot wait to see where Makoto brings his lucky bouquets next.