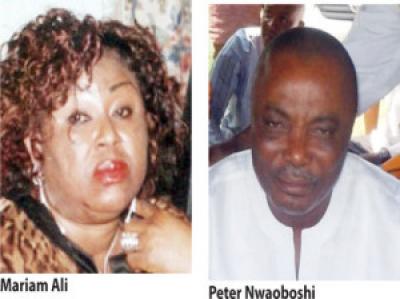 Women, numbering over one thousand yesterday stormed the streets of Asaba, Delta State capital, to protest against the public spat between two chieftains of Peoples Democratic Party (PDP) in the state recently.

The aggrieved women, who came from Oshimili South Local Government Area of the state, protested against what they described as inhuman treatment allegedly meted out to their daughter, Mrs. Mariam Nnemeka Ali, a member of the party’s Board of Trustees and wife of former National Chairman of the party, Dr. Ahmadu Ali.

It would be recalled that last week Friday, at the state party secretariat in Asaba, a free-for-all fight ensued between Mrs. Ali and the state chairman of the PDP, Peter Nwaoboshi over sitting arrangement at the formal presentation of vehicles to PDP chairmen across the 25 council areas by Governor Emmanuel Uduaghan.

Mrs. Ali, whose clothes were torn to shreds, was reportedly almost lynched by Nwaoboshi’s supporters but for the timely intervention of some party chieftains.

Clad in black attires and chanting war songs, the protesters stormed the palace of the Asagba of Asaba and the Government House to register their displeasure over the alleged assault.

Armed with placards of various inscriptions, they described it as monumental taboo that a married Asaba woman in the person of Mrs. Mariam Ali was beaten up in Asaba without regard to the emotions of the indigenes.

They insisted that such act in time past would have resulted in an inter-communal clash, adding, however, that they do not want to go to war with the people of Ibusa where the state PDP chairman hails from.

Leader of the protesters, Mrs. Mordi Chukwudi told the Asagba of Asaba, Obi (Prof.) Chike Edozien that it was shocking that one of his daughters and “an Asaba High chief, Chief Eyi Kpakpando, Dr. (Mrs.) Mariam Nneamaka Ali” was beaten up by an Ibusa man.

Mrs. Chukwudi stated that a 14-day ultimatum has been issued to Nwaoboshi to apologise or be ready to incur the wrath of Asaba gods even as they told him to be prepared to face litigations from women.

The protesting women demanded explanation from the PDP and the state why the honour and integrity of their community was desecrated, maintaining that Asaba women were the pride of the land and held in high esteem.

“To beat up our daughter is the highest disrespect more so, a married daughter of Asaba. We are restive until those involved in this show of shame are brought to justice, the necessary traditional cleansing of this sacrilege should be done immediately to assuage the spirits of our fore fathers.

“To fail to do something is to embolden some of these rascals in our community under the cover of politics to lay siege to us”, they argued.