Founder of the disbanded Niger Delta People’s Volunteer Force (NDPVF), Alhaji Mujahid Asari Dokubo, has reacted to Wednesday’s attack on former Head of State, General Muhammadu Buhari (retd) in Kaduna, saying it was a plot to push the military to take-over power.

In a series of conspiracy tweets via his handle @asari_freedom, the ex-militant leader claimed that the plan was to ‘kill Buhari to push the North to riot and cause calamity, so the military can take over from GEJ’, in reference to President Goodluck Ebele Jonathan.

Alleging that yesterday’s attack was just the beginning of more to come in a bid by desperate northerners ‘to grab power’, Asari advised leaders of the region to take a stand and expose those behind the insurgency because according to him ‘Boko Haram will kill you even if you support them’. 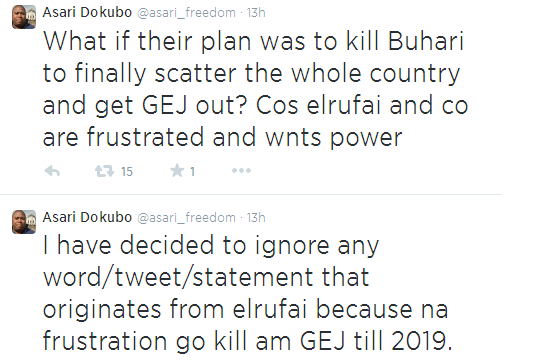