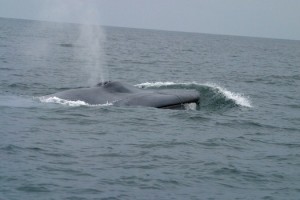 Capt. CiCi Sayer and photographer Dale Frink were aboard a 21-foot-boat looking for whales when they got closer to the animals than they ever expected.

They were eyeing a blue whale about 150 yards away from their vessel when another collided with their boat and turned it over. Sayer said the whale was just hitting the surface of the water to feed on small shrimp called krill.

Both Sayer and Frink were tipped into the water, where they were rescued by another boat in the vicinity.

Most of the people who think that the video “looks bad” are justifiably concerned for the safety of the whales. I can agree with that, as someone who emphatically encourages safe boating around whales. I feel confident saying that the captain was doing everything within her ability to be safe and respectful for the animals. Accidents happen however, and things would have been a lot worse if proper protocols and modern safety equipment not been in place.

Frink brought a GoPro camera on to the boat, which captured video of their ordeal.