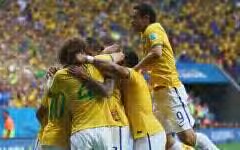 After their dramatic penalty shoot-out success against Chile in the round of 16, Brazil face perhaps their sternest challenge yet on the road to World Cup glory when the hosts face an impressive Colombia side at Estadio Castelao, Fortaleza on Friday.

While the progress of Luiz Felipe Scolari’s side has been far from overwhelming to date, including a 1-1 draw with Mexico at the venue here in Fortaleza, they continue to carry the frenzied support of the nation and the atmosphere promises to be spectacular.

A worry for the host nation, though, is the fitness of star man Neymar. The Barcelona attacker has been the offensive spark for his side throughout the tournament to date, netting four times, but sustained thigh and knee problems in the narrow success over Chile, although the medical team of the Selecao have been at pains to stress that Neymar will be fit for this encounter.

Arguably more of a headache is the loss of Luiz Gustavo, who would have policed Colombia dangerman James Rodriguez, through suspension. Paulinho will likely step into his shoes while Marcelo quit training early on Wednesday but seems likely to play.

Alterations in Brazil’s side are unlikely to be dramatic, as Scolari has built his unit around a regular core of players who are rarely altered.

There is little doubt which man Scolari will have highlighted to his defence prior to this clash. In the absence of Radamel Falcao, Monaco club-mate James has emerged as one of the stars of the competition, with the 22-year-old going shedding his reputation as primarily a maker of goals by toping the scoring charts with five of his own, including a spectacular opener as Jose Pekerman’s side dispatched Uruguay 2-0 in the last 16.

Mario Yepes was fit to play against the Uruguayans, despite concerns over a hamstring problem, while Jackson Martinez should retain his spot in the starting XI after coming into the team for the Uruguay victory. {GOAL}