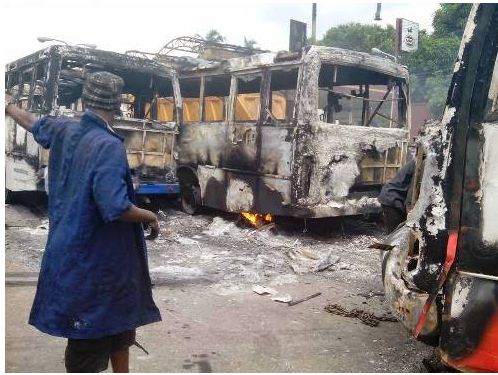 LAGBUS Asset Management Limited, operators of BRT buses have denied that one of their buses killed a soldier. Soldiers went on a rampage yesterday around the Palmgrove area of Lagos, stopping BRT buses, asking passengers to get down, beating the drivers, destroying the buses before eventually setting them on fire. The damage yesterday is said to be worth over N100million.But speaking about it, a LAGBUS official said they had nothing to do with it, explaining that they only found a corpse in their bus and went to report it to the police;

“By 10 p.m. last night, one of our buses broke down at Onipanu; by 11 p.m., a rescue team with a van went to the scene to tow the bus. Unfortunately, area boys started stoning our team which made our men to leave. Meanwhile, the driver put on hazard lights and C- Caution to alert motorists of the breakdown. Continue…

“By 5am this morning, before the rescue team got to the scene, a corpse had been deposited in our bus and a motorcycle parked behind it.

“When we saw it, we reported the case to the Pedro Police Station, Somolu, but before we got back to the scene, soldiers had burnt down five BRT buses and one belonging to LAGBUS.

BRT buses were later withdrawn from the roads yesterday to prevent more damages. The man who died was an army corporal

Share
Facebook
Twitter
WhatsApp
Previous articleKanye West gets booed on stage after he launches into ’20-min rant’
Next articleCommunity Manager, Lagos at Uber Technologies
- Advertisement -Ad ==> Discover how a young Nigerian graduate now makes a consistent 40k per week doing a legitimate online business. You too can start yours now, click here!!!