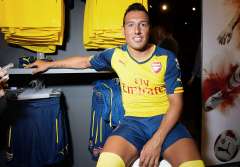 Arsenal’s diminutive midfielder Santi Cazorla believes the Gunners have got what it takes to be crowned English champions next season. Information Nigeria understands.

The Spaniard wants the team to build on the Facup success, that saw Wenger’s men end the long run trophy drought.

“We hope to win more trophies – I want to win the Premier League or Champions League,” he said at the launch of the club’s new PUMA kits.

“Of course we can win. We have a good team and with the support of the fans it’s important for us.

“We have high expectations to go better than last year. We won a trophy last year and we want to do it again.

Hopefully we’ll make some great signings to support the squad and if so, it’ll be good.”