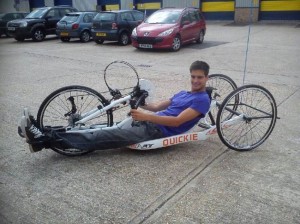 If your summer holiday starts with a frustrating traffic jam or delayed flight this year, count to ten and think of Alex Brooke-Turner.

Whatever challenges you encounter, they’re unlikely to be a patch on what the 24-year-old has gone through to make it to Pula, in Croatia.

The sports fan was cycling to the coastal city with a group of friends in 2011 but his journey ended when he came off his bike in Belgium – suffering a spinal injury that cost him the use of his legs.

Four years on, he is resuming the trip from the point where he left off – using a bike he can pedal with his hands. His friends will join him for the 1,600km (1,000-mile) odyssey, starting on August 1.

‘When I was in intensive care I made the decision to finish the journey,’ he said. ‘I knew it would take a few years but there was no way I would give up.’

Mr Brooke-Turner had been returning to his friends after getting his bike repaired at a shop, when he went over his handlebars. He was knocked out and woke up after surgery at hospital in Liège.

‘I couldn’t feel my legs and didn’t know why,’ he said. ‘I felt guilty I had made so much trouble for everyone. I didn’t know how serious it was.’

The south Londoner, from Streatham, was sent to Stoke Mandeville Hospital, Buckinghamshire, where he had physiotherapy to help him re-learn basic tasks such as getting dressed.

In April 2012 he tried a handcycle at the hospital’s inter unit Games – and immediately began planning for his 22-day ride to Croatia.

He got his own £3,500 bike last August and began intensive training rides in January.

‘I took my handcycle to Richmond Park for the first time with my dad,’ he said. ‘That is when I knew the Croatia trip would become a reality.’