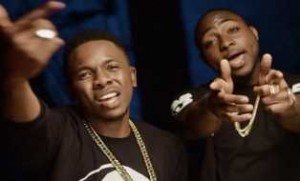 There has been a long standing rumor that the hit track ‘Aye’  by Davido was written by fast rising singer — Runtown.

Davido has however come forward to clear the air on the unresolved issue.

The new BET crowned prince of African music, Davido has clealy stateds that he wrote the song all by himself.

Davido while fielding questions about “Aye” from AvanteTV, stated, “Runtown and TSpice work great together. TSpice sent me a couple of beats and We recorded like three songs and everyone was just like, this is the one. So we shot the video naturally. Everything about me is natural.”

When asked if Runtown wrote the jam “Aye”, he revealed, “No. But the producer got the beat’s check (he got paid). He (TSpice) is a talented producer.“