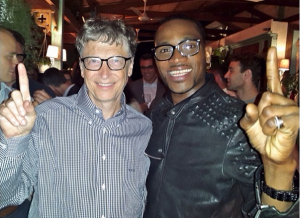 This further proves my argument, D’banj’s career might not be blossoming as a singer but mark my words when i say the Kokomaster has made more money than he would have ever seen with Mo’ Hitz records.

D’Banj has been in France for some weeks for a meeting or two for his new love and agriculture campaign.

During the course of the meeting, he ran into American business magnate, Bill Gates.