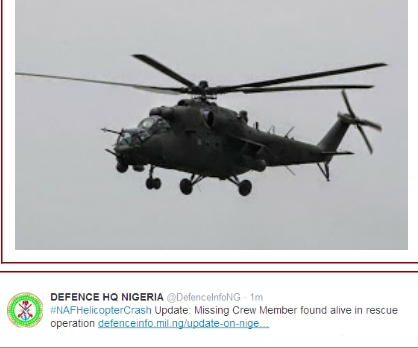 Okay, this is beginning to get confusing. First, two people died, one was found alive. Then one body was found and the other body missing. And now the technician who was declared dead and his body missing has been found…alive! We thank God sha!

The Nigerian Defence headquarters this evening released a statement on its website stating that the technician they earlier reported dead and his body missing after the Air Force helicopter crash on July 21st in Bama, Borno has resurfaced alive at the Military headquarters in Maiduguri. Statement below.
The Engineer crew member of the crashed Nigerian Air Force Mi-35 Helicopter earlier declared missing has been found alive. The crew member who was declared missing when his body could not be located in the vicinity of the crash resurfaced at the military Headquarters in Maiduguri today, having trekked through the bushes after the crash.
It is thus confirmed that Flight Lieutenant NM Halilu, Co-Pilot and Warrant Officer Augustine Nwanonenyi, the aircraft technician survived the crash while Flight Lieutenant Onyeka Nwakile was the only one lost in the crash.  The family of the officer has been duly informed while the two survivors are in stable condition but receiving medical attention.
Meanwhile, search and rescue operation on the incident has been concluded, while investigation into the crash continues.