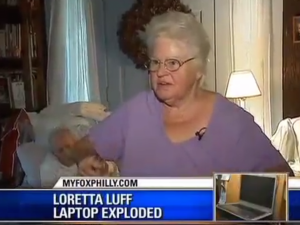 A 72-year-old woman suffered minor injuries when her laptop exploded in front of her on Sunday afternoon.

Loretta Luff, of Langhorne, Pennsylvania, was checking her email and playing Spider Solitaire when the laptop’s battery blew up, starting a fire and sending debris six to eight feet across the room, according to CBS Philly.

“The next thing I knew, my shirt was on fire,” Luff told reporters. “I grabbed that and took that off and I think that’s when I singed my hair.”

Luff quickly used water from a nearby dog bowl to put out the flames and prevent further damage to her home, which she shares with her husband and their dogs.

Ultimately, Luff said she suffered first and second-degree burns on her face, arms, chest and foot. According to Philly.com, doctors also removed debris from her nostrils.

Luff told local ABC affiliate WPVI that her foot got the worst of it. “I think when I came down on a piece of the hot battery part, I came down and stepped on that,” she said.

Dell released a statement to media, promising to investigate the incident but suggesting the possibility that Luff’s battery wasn’t Dell-approved.

The company said, in part:

It’s also important to note that, in our product documentation, Dell tells customers that “using an incompatible battery or a third-party battery may increase the risk of fire or explosion and that they should replace the battery only with a battery purchased from Dell that is designed to work with their Dell computer.”

Luff, who has had the laptop for 6 years, told CBS she replaced the battery about three years ago but wasn’t sure if it had been approved by Dell or not.