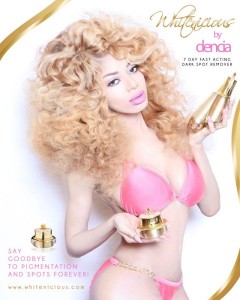 Controversial Cameroonian/Nigerian singer and businesswoman — Dencia has recently come under fire after she has been hiding away with a massive butt which I still suspect surgery was behind. Sha, I am not talking about her bumbum today.

The National Agency for Food and Drug Administration and Control (NAFDAC) is looking to arrest Reprudencia Sonkey aka Dencia.

The warrant has to do with the singer selling her controversial Whitenicious body cream in Nigeria, which the agency says is illegal.

While speaking at the recently held Nigerian Entertainment Industry Health Insurance Convention, the Director-General of NAFDAC, Dr Paul Orhil said the agency will arrest the Pop singer if they lay their hands of her.

‘There is this Cameroonian singer that has been going around with a cream…if I get her, she’ll be arrested’, he said at the conference, which held on Tuesday, July 22, 2014 at the Grand Ballroom of Eko Hotel and Suites, Victoria Island, Lagos.‎

Orhil also accused Dencia of selling a product that causes skin cancer. However, this is yet to be medically proven.

Dencia’s Whitenicious is a pigment-whitening cream created for individuals who want to lighten dark spots or even their skin tone. The product has stirred a lot of controversy in local and international media in the past few months.

‘Whitenicious is not made in Nigeria and has no connections with Nigeria. Doesn’t Nigeria have more problems than worry about Dencia? Arrest Dencia lol how do you arrest a US citizen? Smh African leaders need to focus on Africa and stop joining the bandwagon for fame’, a rep for the singer told NET via e-mail.‎

‘Whitenicious has been in the market for under 7 months and all these vicious lies and attack someone will pay for it and maybe it will be NafDAC incase they didn’t get a simple law class you don’t make such comments about anyone and their business especially because no one has had any cancer like they claim. This is defamation’.

‘They need to study more and talk less. Nigeria has more issues than Whitenicious, Nigeria has worst pollution that Whitenicious, maybe he can put his energy into fixing roads and giving the masses clean water and lights to keep them healthy since he is worried about a cosmetic that isn’t a drug.

Where is Dencia selling the products in Nigeria? Does she have a store there? Why are people so pompous? He (Orhii) should get a life or maybe get laid by his wife or side chicks. Dencia doesn’t care and wouldn’t even give it any attention because it is that irrelevant’.

The pop singer is currently in the US, where she’s based.