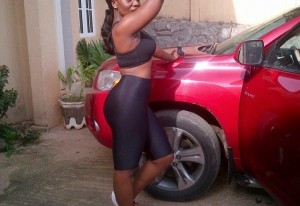 Veteran Nollywood actress — Empress Njamah was off the movie scene for a while but made a return months ago.

She might not be the prettiest actress but her body makes us think she is a direct descendant from the linage of goddesses.

The seasoned Nollywood Actress, Empress Njamah is making a good return to the movie scene after being off for a while.

She shared some very hot photos of herself on her IG page.

Scroll to see the other shots: –