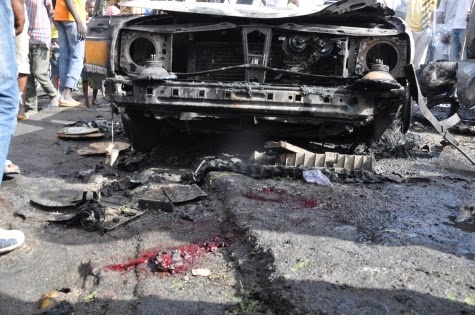 A one-year-old baby was feared dead and others wounded following the incident which was said to have occurred at about 2:00p.m few meters to the divisional police headquarters at Ogrute, Nigerian Tribune reports.

The explosion which was suspected to be bomb blast  made the market women and traders scamper for safety, leading to a stampede.

The baby reportedly died during stampede which lasted for a some time, while hoodlums looted shops.

When the scene was visited on Saturday by journalist, several of the traders were seen lamenting their  loss.

Commercial activities have however resumed in the market.

It would be recalled that between 20 and 50 suspected Boko Haram members were apprehended at Obollo Afor, Udenu Local Government Area of Enugu State, on June 25, 2014, Wednesday. Though a spokesperson said the suspects might be traders, not terrorists.

With the current spate of insecurity in the country churches in Enugu had begun thorough screening of its members before allowing them into the Sunday services as part of of efforts to prevent attack on the church by Boko Haram insurgents. They also banned women from entering with hand-bags as part of the security measures. Some Pentecostal churches within Enugu also procured bomb detecting equipment with which they screened vehicles driven by worshippers into the premises of the churches within the state capital.