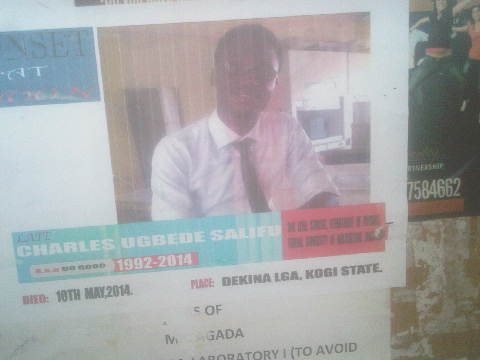 On 10th of May 2014, just as students of the Federal University of Agriculture Makurdi were resuming from the customary semester break, an unfortunate incident took place on campus that shockingly had been handled first clandestinely, and now forgotten.

Just as we reported few weeks back, a student Charles Ugebede was shot dead in school by suspected Armed Robbers.

Till date, a detailed analysis nor investigation by the police, or a statement from the school has not been revealed to the public and family of the deceased.

While in the comfort of his home in the “Student Village” a stone throw from the school premises, Charles was killed by the bandits for refusing to release his Laptop gadget.

A witness, who didn’t want his name on this, told Information Nigeria that during the tussle, a defiant Charles was shot dead by one of the Robbers.

Furthermore, its strange to note that the sound of gun fire did not deter the school management into making inquiries that day.

Uni Agric’s lackluster attitude to security is alarming. Last month in a precedent Armed Robbery attack at a bank in the school vicinity, many students were injured and lost valuable items.

The dare-devils, according to multiple sources, raided the Bank for over an hour, unable to gain entrance, they proceeded to attack nearby students who took cover from being hit by stray bullet. Security personnel finally arrived after they left.

The “Student Village” has been the center for many heinous activities.

Everyday students are forced to endure Cultism-related activities that some find “Mentally Disturbing”.

“Am traumatized by some of the secret events taking place in this campus, its very disturbing but if the school management can’t protect us, I don’t know what else to do.”

“I have been robbed so many times. I don’t know if they are cultists or robbers.”

Many of the course mates of the slain victim have condemned the killing of their mate, who they described as calm and easygoing. They also expressed discomfort of the appalling security challenges in school.

“Am angry, sad, and unhappy. This madness has got to stop” a friend of Charles who begged not to include his name.

During the period of Fulani Herdsmen brutality to villages in Benue state, it was an horrendous experience for the students.

Since Uni Agric is located in an interior space from the main town and around villages, it was at first feared the school might be prone to attacks by the terrorists.

And when a popular village named Gbajimba, a mini distance to the varsity, was raided with over 80 innocent villagers murdered, it soon dawn that an assault by Herdsmen is probable.

Despite the heighten tension, it was observed that during this difficult period, University of Agriculture did not station armed security guards in the school premises. The porous nature eventually led to the aforementioned robbery on the bank.

Albeit, Uni Agric is not the only school in dire need of high level security.

Despite its presence in the town, Benue State university was attacked by unknown gunmen and made away with items from mostly the female students.