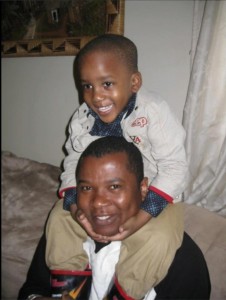 A 41-year-old New York man who choked his 8-year-old son to death has been charged with second-degree murder and faces 25 years to life in prison.

The man, Boujeke Kenmoe, was recently hospitalized in Queens General Hospital in order to recover from self-inflicted wounds. Kenmoe allegedly slit his wrists after carrying out the attack on his son, Jerry Kenmoe. He has since returned to a stable condition but remains in the hospital as he awaits instructions as to how the charges against him will proceed.

“This is a horrifying case of a father accused of murdering his own son, a defenseless 8-year-old boy, by choking him to death. The defendant’s actions, if true, are incomprehensible in a civilized society and must be severely punished,” said Brown.

Kenmoe and his son were both found by law enforcement officials who arrived at the home after receiving an anonymous 911 call on Sunday evening. According to the New York Daily News, the boy was found lying face up on his bed with bleeding eyes and marks on his neck, symptoms consistent with death by strangulation. Kenmoe was sitting nearby with blood draining from his wrist. The boy had apparently been dead for several hours.

According to CBS Local, Kenmoe allegedly admitted to paramedics on the ride to the hospital that he had choked his son and attempted to kill himself.

Although neighbors and friends of Kenmoe described him as a good man and a loving father, one neighbor informed authorities that the man’s wife “had a plan to split the family apart so she could leave” after their relationship became unstable. Kenmoe’s wife was not in the house when law enforcement officials arrived.

The investigation into both parents will continue as Kenmoe awaits arraignment.