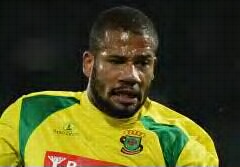 Manchester United flop Bebe has completed his move to Benfica in a deal worth up to €3 million [£2.3m], with United to receive 50% of any sell-on fee.

The 24-year-old joined Old Trafford in a €9.3m deal from Vitoria de Guimaraes in 2010, despite Sir Alex Ferguson admitting that he had never seen him play.

Bebe made just seven appearances for United in his debut season and was subsequently loaned out to Besiktas, although a cruciate ligament injury restricted him to featuring in only four games for the Turkish club.

The forward returned to United for their pre-season tour in 2012 but after failing to break into the first team he was sent out on loan to Rio Ave in January 2013.

Bebe was granted another loan move to Portugal at the start of last season and he finished with 11 league goals for Pacos de Ferreira. {GOAL}