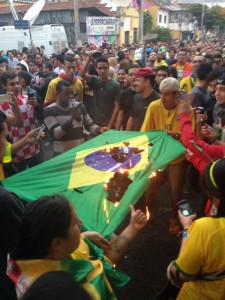 I know by now, everyone would have heard about the humiliating defeat Brazil suffered in the hands of Germany yesterday, in the semi finals of the World cup.

Brazil thought they will regroup after Neymar’s injury and their captain, Thiago Silva’s suspension, but they were wrong.

Instead, they went down 0-5 against Germany in just less than 30 minutes into the game.

Photos of their despairing fans are seen below: –