I Couldn’t Feel My Legs After Being Injured – Neymar

The Transmission Company of Nigeria (TCN) says the system instability like what was witnessed on Thursday cannot be totally...
Read more

President Muhammadu Buhari has ordered Abubakar Malami, attorney-general of the federation, to take charge of the case of Ibrahim...
Read more

Barcelona FC star Neymar feared he was paralyzed after the injury he suffered during the recent World Cup game Brazil played against Colombia. 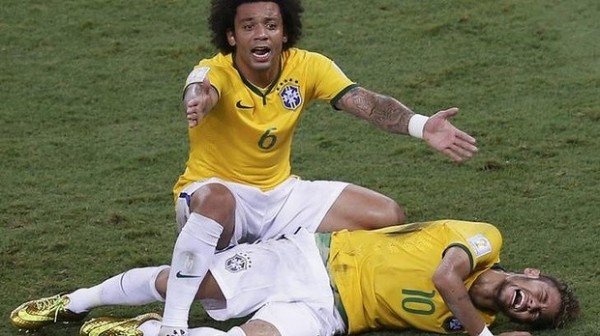 Photo: Marcelo and Neymar right after the injury incident

Hit in the back by Juan Zuniga, the 22-year-old forward was carried off from the field in pain. It was soon revealed that although there was no need for surgery, Neymar would not be able to proceed in the Mundial. He was rushed  to the hospital, where the Brazil team doctor confirmed that he had fractured one of his vertbrae.

However, the first reactions was terrifying, The Independent reports with reference to the Brazil coach Luiz Felipe Scolari.

“He said: ‘I can’t feel my legs’. Marcelo was scared and called the doctor on but the doctor couldn’t get on in the confusion. It was a big shock, the image of Neymar being stretchered off to the helicopter, in difficulty, crying… Neymar is our star player, because he’s the type of match-winner who would make a difference in any team.”

Meanwhile numerous supportive messages keep reaching the Barcelona forward, who reportedly got tearful upon being informed he would not be able to join his team in the further race for world championship. Football colleagues and fans from all over the world are sending messages wishing Neymar a speedy recovery.

Brazil is to meet Germany in the semi-final on Tuesday.

The Red Devils have agreed a £1.28m sign-on fee with Inter Milan for the transfer of wing-back, Ashley Young, Sky Sport reports. The fee is...
Read more
- Advertisement -