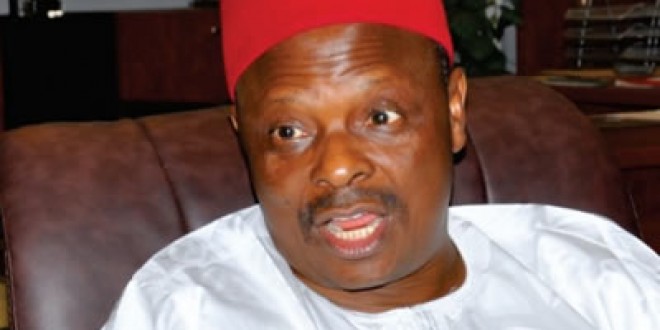 Governor of Kano State, Engr. Rabi’u Musa Kwankwaso has said that the All Progressives Congress (APC) governors are solidly behind their Adamawa counterpart, Murtala Nyako, and will explore all avenues to make sure that the impeachment moves against him do not succeed.

In an interview with newsmen at his office yesterday, Governor Kwankwaso accused the PDP-led federal government of witch-hunting governors of APC-controlled states.

He specifically accused the federal government of using the security agents to influence the election in Ekiti State, alleging that a similar plan is underway in next month’s governorship poll in Osun State.

Kwankwaso decried the current political drama playing out in Rivers, Nasarawa, Edo, Osun, Kano and Adamawa states respectively, and accused the federal government of doing everything to destabilise the states.

He alleged that recently, a federal minister took away Kano Assembly members to Abuja and coerced them to defect to the Peoples Democratic Party.

Kwankwaso described the Goodluck Jonathan government as the most corrupt in the history of the country, noting that any person involved in corrupt practices would have the charges dropped once he or she joins the ruling party.

He also faulted the federal government in the way it hastily dropped corruption charges against the son of the late dictator, Gen. Sani Abacha, Muhammad Abacha, simply because he joined the PDP, saying the latter was even set to contest governorship election in the state in 2015 on the plattform of PDP.