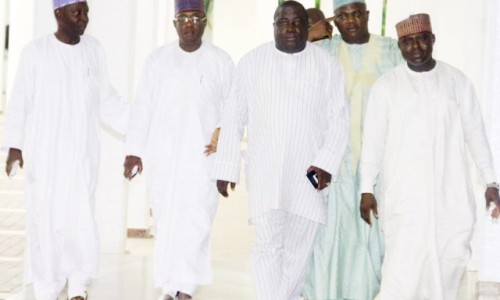 Speaker of the Nasarawa State House of Assembly, Alhaji Musa Ahmed, and five principal officers of the House yesterday visited the presidential villa, Abuja, where they held a private meeting with President Goodluck Jonathan.

The lawmakers were led to the president’s office by deputy national chairman of the Peoples Democratic Party (PDP), Chief Uche Secondus.

Speaking with State House Correspondents on the nature and outcome of the two-hour meeting with the president, the speaker responded, “It is a private visit”.

When pressed further to know what the private visit was all about and why it came at a time the lawmakers were insistent on impeaching the state governor, Alhaji Tanko Al-Makura, the speaker said: “I don’t have the mandate of the State Assembly to brief the press. The Chairman of the House Committee on Information has the mandate to speak to the press on anything concerning impeachment”.

Mr. Secondus, who emerged from the president’s office some minutes after the lawmakers, insisted that the meeting was a consultative one, saying, “Its consultation. I can’t say whatever now. We are consulting”.

The meeting between the lawmakers and President Jonathan came barely 24 hours after the Nasarawa State Assembly asked the state’s chief judge, Justice Suleiman Dikko, to constitute a seven-member panel to investigate allegations of gross misconduct levelled against Governor Al-Makura.