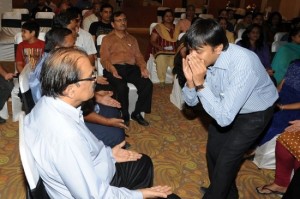 A lot of people want to lose weight quite badly, but is there anyone desperate enough to try this Indian man’s weird technique? Jigar Shah, from the city of Ahmedabad, claims that he can induce weight loss in a person just by using his vocal cords to emit ultrasounds. He also says that he’s helped cure several people suffering from hypertension, depression, asthma, aches, kidney failure and even cancer, using the same technique.

According to Jigar, his vocal cords are capable of emitting ‘ultrasound’, which he describes on his website as a ‘very high frequency massage that can penetrate up to 5 inches below the skin’s surface’. Conveniently, the frequency is not audible to the human ear. So when Jigar opens his mouth and says that he’s emitting ultrasound waves, there is really no way to tell if he’s just pretending.

His website also tries to explain how the technique works: “Leaving the surrounding tissues untouched, ultrasound therapy for spot fat reduction and weight loss targets the fat layer of the skin, forcing fat cells to release triglycerides which are then processed by the body’s natural fat burning process. The empty fat cells shrink and are expelled as body tissue waste. The results are less fat in the treatment area with visible inch loss and reduction in body circumference.”

While experts might balk at such a rudimentary explanation, it appears that people are actually falling for Jigar’s claims. If the ‘Success Stories’ on the website to be believed, some have lost as much as two pounds of fat in only two days and others have lost inches within five minutes! This one guy claims to have lost 10 kilograms  – but his ‘before’ and ‘after’ pictures don’t show any such transformation.

One source informs us that Jigar had successfully reduced four inches of body fat in a person, in five minutes flat. The event is said to have taken place on March 7, 2013, at the Shivanand Ashram in his hometown, Ahmedabad. Rupa Patel, a participant at one of his media events, said: “I have attended this session for the first time and I am feeling very happy, I have never lost so much fat in a single day, I want to continue it.” The common treatment areas that Jigar focuses on include the arms, waist, stomach, hips and thighs.

Jigar was featured on the popular  TV show ‘India’s Got Talent’, where he wowed the judges with his technique. I watched a video clip of the show, and I must say, his performance was nothing short of hilarious. Once he told the judges what his vocal cords were capable of, they summoned a rather plump woman to test his technique. Jigar and the woman sat on chairs facing each other. He asked the woman to close her eyes and what he did next took the judges and the audience by surprise!

Jigar cupped his mouth with his hands, aimed for the woman’s belly and his hands began to vibrate in the most bizarre fashion. Naturally, no one could hear anything. Several weird gestures followed, during which the judges remained dumbstruck. At one point, he appeared to be attempting a sort of martial arts move – forcefully pushing air towards the woman’s belly. When the spell was broken, the woman opened her eyes and claimed that her tunic had actually loosened!