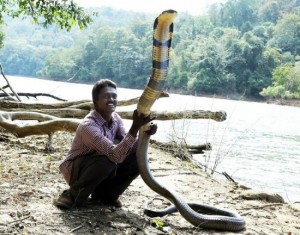 40-year-old wildlife conservationist Vava Suresh has a way with snakes. His life’s mission is to ‘love and guard’ even the most venomous of slithery creatures – he’s already rescued over 30,000 snakes so far. His unique talent and hobby have earned him the nickname ‘Snake Man’; people all over the South Indian state of Kerala summon his expert services when they want a snake safely removed from their homes.

Suresh, who was born into a poor family in the city of Thiruvananthapuram, has a completely different perception of snakes than most people. He says that they’re gentle, lovable creatures that need kindness and protection from humans. “Snakes are a part of my life since childhood,” he said.

“I actually do not know how I fell in love with them. As a child, I had seen people brutally killing snakes. That instilled sympathy for the creature in my mind. At the same time, idols of serpents in temples made me feel that they have some divinity and should be protected.”

Suresh rescued his first live snake when he was only 12 years old. It was a baby cobra; he hid it in his house and carefully studied its behavior. Slowly, he began to understand how to handle snakes without injuring them or himself. Today, his rescue-list includes 12 King cobras, 7,000 Indian cobras, 1,600 to 1,700 vipers and 150 kraits. He doesn’t have any special tools for the dangerous job, he manages to get the job done with his bare hands.

His cell phone rings constantly; every time there’s a snake sighting, people call him for help. Even the local police and fire department sometimes use his services to trap the reptiles without causing them any harm. “Many of them get my phone number from police stations or from fire force units,” he said. “Some local dailies also publish my mobile number for the people to contact me easily.”

Besides rescuing snakes from urban areas and releasing them into the wild, Suresh preserves snake eggs until they hatch. He also works hard to create awareness among people about snakes and their behavior.

His job is undoubtedly a risky one; one of his fingers was surgically removed after suffering a cobra bite. And in 2012, the skin on his right palm had to be grafted after another snake bite. Over all, Suresh has survived more than 266 venomous snake bites, and his body has now developed sufficient antibodies against snake venom.

Recognizing his superior talent with snakes, the Forest Department of Kerala offered him a government job in 2012, at an upcoming snake park. But Suresh declined, because the job wouldn’t permit him to help the society and snakes the way he wants.