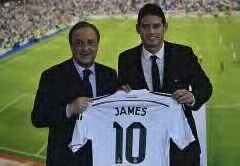 Florentino Perez has backed James Rodriguez to “seduce” supporters after completing his €80 million move from Monaco to Real Madrid.

The 23-year-old was unveiled as a Madrid player in front of 44,000 fans at the Santiago Bernabeu on Tuesday evening following the completion of his medical and signing of a six-year deal with the club.

James joins the club on the back of a fine World Cup in which he walked away with the Golden Boot as the tournament’s top scorer with six goals, and Perez hopes he can replicate that form for Madrid.

“Today arrives a man who seduces football fans, has led an extraordinary Colombian national team, a player who was one of the sensations of the World Cup,” the Madrid president enthused.

“Their brilliant game and his goals have confirmed him as one of best at the World Cup, with the Golden Boot and the best goal of the tournament. Welcome to James Rodriguez!”

James spent just one season with Monaco after joining the club for €45 million from Porto last summer, but made no secret of his desire to become a Madrid player with a string of comments during the World Cup.

That desire to wear the Madrid jersey was not lost on Perez, who revealed his pride at giving the Colombia star the opportunity to follow in the footsteps of many of his childhood heroes.

He added: “You have never hidden your passion for our shirt. Every time you have been asked you answered proudly.

“Today you will intensely remember the first time you visited the Bernabeu and you said you wanted to play here. That dream has just begun. The boy who dreamed of wearing the shirt of [Zindedine] Zidane, Raul and [David] Beckham is now a Real Madrid player.”

The deal makes James the fourth most expensive footballer of all-time, while he will wear the No. 10 shirt for the club.{GOAL}