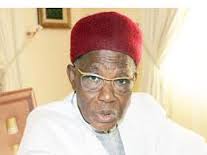 President Goodluck Jonathan on Tuesday said he received with sadness, news of the death of a prominent politician and elder statesman, Alhaji Umaru Dikko.

The northern politician died in a London hospital earlier today at the age of 78.

In a statement by his Special Adviser on Media and Publicity, Dr. Reuben Abati, the president extended his condolence to the family, friends and political associates of the former Minister of Transport during the Second Republic, who he said also played a leading role in the National Party of Nigeria, NPN, which controlled the Federal Government in that dispensation.

President Jonathan said he joined them in mourning the renowned political leader who, in spite of advanced age, continued to actively contribute to the nurturing and strengthening of democracy in Nigeria until his death.

The statement read in part: “President Jonathan firmly believes that Alhaji Umaru Dikko’s significant contributions, especially his life-long advocacy for stronger political parties, greater discipline within political parties and the supremacy of political parties have assured him of a place in the annals of Nigeria’s political development.

“He prays that God Almighty will receive Alhaji Umaru Dikko’s soul and grant him eternal rest”.