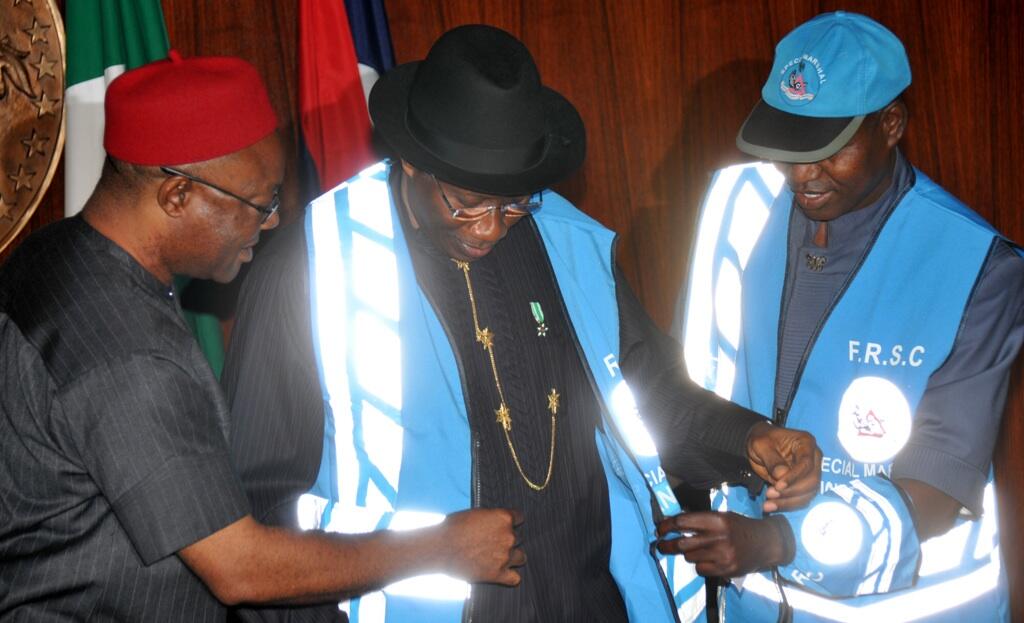 President Goodluck Jonathan has given marching orders to the Federal Road Safety Commission (FRSC) to impound imported vehicles with no genuine customs clearance.

The president gave the orders at the State House, Abuja, on Wednesday, when FRSC Corps Marshal Osita Chidoka presented to the Federal Executive Council (FEC), an update on Nigeria’s status on the United Nations Decade of Action for Road Safety (2011-2020).

The FRSC boss had earlier decorated Jonathan as grand patron of the special marshals unit of the commission. This would be the first time a sitting president would be so honored.

Chidoka said President Jonathan was decorated owing to the successes the FRSC had recorded under his administration which he listed to include increase in staff strength from 11,000 to 19,000; patrol vehicles from 170 to over 800; ambulances from 10 to 52; more call centres and funding of the commission.

Briefing State House correspondents after the FEC meeting, the corps marshal explained that the directive would guarantee a reliable database on cars and eliminate fake customs papers often presented for vehicle registration.

He said the UN Decade of Action was declared due to the global statistics that road crashes were annually claiming over 1.3 million lives, especially in developing countries.

Chidoka also blamed the delay usually associated with issuance of drivers’s licence to what he called network dependence.

“We want to ensure that fake licences don’t occur. When your finger prints and picture are captured, they’re transferred through the wireless network into our database and it’ll check you against all the people with previous licences. That’s why we give you a temporary one. Within the 60 days that you’re required to get the permanent one, it’ll check if you’ve done any other licences”, he said.