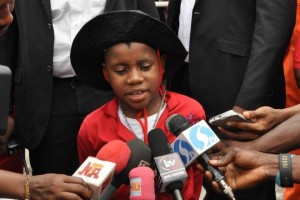 OzzyBosco who is working in partnership with LAWMA is to sensitize, motivate and educate the Lagos populace in particular kids/teens on the need to keep their environment clean.

The LAWMA Managing Director, Mr Ola Oresanya at the LAWMA headquarters, Ijora-Olopa, described the wonderkid as an exemplary child who is a Change Agent for his generation. He used the occasion to announce the involvement of OzzyBosco Wonderkid in the LAWMA “I Care Project” which he described as new innovation in the State’s cleanliness culture. Kids he said are being taught to make wealth from waste; picking up waste in their homes, schools, public places and bringing them to LAWMA in exchange for a mouth watery pack.

The occasion was however rounded off with a dazzling stage performance by the Wonderkid OzzyBosco, who thrilled the exhilarating audience with the project theme song titled “KEEP LAGOS CLEAN”. The song specially composed by kid star and dedicated to the project.
Afterwards, the LAWMA Ambassador with his large entourage, including top officials from his two (2) brands (Tigo Milk and LAWMA) proceeded to the headquarters of the Lagos Island (West) Local Government Office in Isale Eko where they received very warm welcome by top management officials of the LGA.

Shortly after the reception, the team moved to the streets of Isale eko through Iga Idugaran where they embarked on the proper cleanliness exercise to the admiration of all the people around. The high point and motivating part of the exercise was seeing OzzyBosco and the children at the forefront; physically tackling the job and taking the lead position whilst adults admire and follow.

In his speech, Mr Ola Oresanya poured encomium on the kid dynamite whom he described as a sensational child star. He further stated that “If you want to change a nation, you start by re-orientating the children, so that the next generation will have the right environmental values”.

The next project is expected to hold in September in another LGA. In line with the road map of the project, OzzyBosco and team will be working in 57 Local Government Areas (LGAs) and Local Council Development Areas (LCDAs) in Lagos State. This historic project is planned to hold respectively (every two months) using the existing Thursday market sanitation system.