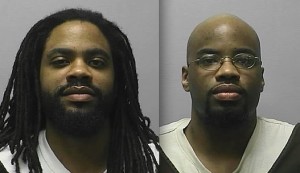 The Kansas Supreme Court on Friday overturned death sentences for two brothers convicted in the 2000 execution-style murder of four people on a snowy soccer field in Wichita, ruling that the trial judge erred in refusing to conduct separate penalty phases for the two men.

Jonathan and Reginald Carr were sentenced to death in 2002. Their December 2000 crime spree, known as the Wichita Massacre, included the kidnapping of three men and two women in a home invasion that included rape and sexual humiliation.

The five victims were shot in the head; one survived.

The court affirmed some of the convictions against the two brothers, including murder, but vacated the death penalty for both of them, sending the case back to district court for new sentencing.

“The Eighth Amendment was violated in this capital case when the district judge refused to sever the penalty phase of the proceedings,” the court wrote in the ruling.

The Supreme Court said the mitigation cases of the two men were at least partially antagonistic, so they should have been treated separately, and said the joint treatment allowed evidence against both of them that might have been excluded in separate proceedings.

Six judges on the seven-member court joined the majority opinion on overturning the death penalty, while one dissented.