Wife of Prophet Iretiola Elijah Ajanaku of Christ Revival Victory Chapel International who was finally laid to rest on July 17th after eleven months of his death gave an emotional tribute during his burial. 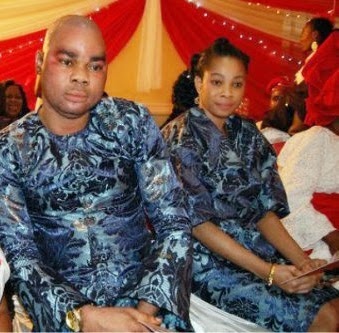 The late pastor Ajanaku died in August 2013 after a brief illness in his country home in Gbongan, Osun State. The burial ceremony took place in Ikota, Command Road, Lagos.

Read Joy Ajanaku’s tribute to her husband below

“I couldn’t imagine myself going through this. It’s like a dream that a loved one narrated to me which I renounced and detested the narrator but I have no choice than to accept as my fate.

I believe God has done the best for me. He doesn’t make a blunder. Even if He does, no one dare question Him because that’s why He is called unquestionable God. I only lost the mortal part of my greatest lover on earth, but his immortal part still lives in me.

I thought I will drop my mortal being before you but according to the popular saying ; man opposes but God disappears.

I wished I would lay down my life for you. I wish I was able to see that giant spirit called death at that point taking your body away and exchanged it with me. I so much miss your correction of love.

I miss how you do call me with your soft tender and sonorous voice. I now understand why he called me and christened me Joy.

Whenever I remember the day I first met him, unspeakable joy filled my heart.

Though I was a Christian by birth, I never knew what it takes to become a bonafide child of God until I met him. God really used him to transform my life beyond my expectation.”

The death of Prophet Ajanaku was surrounded with so many controversies. From his church members claiming he rose from the dead to his wife, Joy Ajanaku insisting in an interview that her husband was still alive and as a result refused to bury him which was reported on January 27, 2014

Ajanaku was reportedly called a cult member. It would be recalled it was reported in September 2013, that one of Ajanaku’s close aides, Emmanuel Olasemeji, who worked for him for five years made some shocking revelations about the late prophet, accusing him of being a chronic liar and adulterer to accusations that he was a cult member

Ajanaku who was gospel singer, Tope Alabi’s estranged spiritual father became very popular after his shocking revelation about Tope Alabi not being able to hide her sexual urge and putting pressure on him to have sex with her in September 2013.

Meanwhile the Joy, widow of Prophet Ajanaku opened up on why she won’t re-marry.

The late Prophet Ajanaku was born a Muslim with an Islamic background and converted to Christianity on his arrival in Lagos State. He is survived by a wife, an aged mother and two children, a boy and a girl.

Share
Facebook
Twitter
WhatsApp
Previous articleWhen He Ordered His Men To Stone Us, No One Talked, Al-Makura Will Be Impeached — Nasarawa Assembly
Next articleMillionaire Orji Kalu Says Jonathan May Become Nigeria’s Last President
- Advertisement - Ad ==> TRUTH FINALLY OUT! Discover how a young Nigerian graduate now makes a consistent 40k per week doing a legitimate online business. You too can start yours now, click here!!!