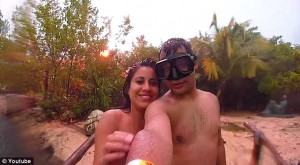 It was supposed to be a sweet vacation selfie — until Mother Nature interfered.

Watch above as lightning strikes too close for comfort, startling Luis Morales Fukutake and his girlfriend during a trip this month to Akumal, Mexico. The bolt appears to cause an explosion behind them. “Almost got hit by a lightning” reads the headline of Fukutake’s video on YouTube.

Fukutake tells the New York Daily News he was on a snorkeling outing when he was ordered out of the water by lifeguards because of a thunderstorm. Still intent on capturing the moment, Fukutake posed in his mask. He said the blast made them drop the camera.

It could have been worse, as visitors to Venice Beach in California discovered Sunday, when lightning killed one man while more than a dozen others were examined after the strike.

Fukutake’s clip has also generated a storm of doubters on YouTube since it was posted July 24.

“Why are you filming yourself taking a selfie? I call shenanigans,” wrote one viewer.

“[P]eople are so gullible it’s hilarious,” wrote another.