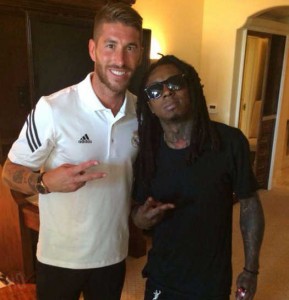 This shouldn’t come as a surprise to you all, because i already revealed that Lil Wayne has signed Cristiano Ronaldo to his Sporting Agency.

However, Lil Wayne met some of the Real Madrid football players at their hotel in Miami, Florida.

In the photos below, Tunechi can be seen with Sergio Ramos, Pepe, and Jesus Fernandez Collado (who is better known as just Jesus).

If you are wondering what the Spanish team are currently doing in the United States of America, they are taking place in the International Champions Cup on their pre-season tour. They have already played and lost to Internazionale on Saturday, but they are still set to play Roma tomorrow and Manchester United at the weekend.