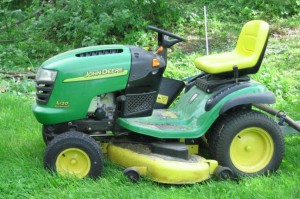 A Florida man was charged with aggravated battery after he allegedly shot his son while the younger man attempted to make a very slow getaway on a riding mower.

Marshall Harmon, 71, was taken into custody in Escambia County on Friday night after he shot his 32-year-old son in the neck, NorthEscambia.com reported.

The two apparently got into an argument at a nearby home so Harmon’s son jumped on a riding mower and started to drive away. The elder Harmon followed in his pickup truck and gave chase.

When Harmon was able to pull his truck up beside the mower, he allegedly fired two shots in his son’s direction.

One of the shots hit his son in the neck and he was taken to the hospital with a non life-threatening injury.

Escambia County Sheriff’s Office spokesman Sgt. Andrew Hobbs said that it didn’t “immediately appear that Harmon intended to shoot his son, but may have instead accidentally hit him.”

Harmon did not protest while being taken into custody.