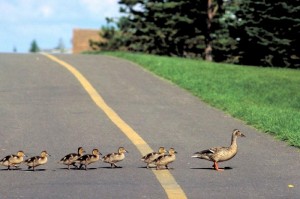 A New Hampshire woman who called police after stopping in a highway median to help some stranded ducklings plans to fight a $44 ticket.

Hallie Bibeau of Newfields says she was driving east on Route 101 on Friday when she had to slam on her brakes to avoid hitting the ducklings. She says their mother and several of the ducklings were hit by a car. The mother died.

The 33-year-old Bibeau called 911, got out of her car and captured the two surviving ducklings.

A state trooper issued Bibeau a ticket for stopping in the median. Police say median stops are for emergencies, and they didn’t consider this to be one.

Officials say the ducklings were taken to a wildlife rescue in Maine, where one of them died.