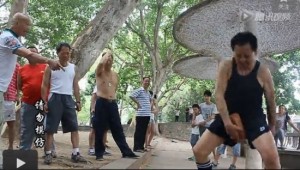 While most elderly men go to the park for a leisurely stroll, retired railway worker Zhou Chengli prefers a more ‘hardcore’ workout. The 70-year-old practices a nut-crushing routine of hitting himself repeatedly in the crotch with hammers, metal weights and bricks. He doesn’t flinch, even for a second, as he pounds on his ‘balls of steel’.

Zhou, who hails from China’s Hubei Province, says that he has been practicing the ancient art of ‘iron crotch qigong’, which is one of the rarest and most difficult disciplines of Shaolin kung fu. The practice involves daily exercises that train men to sustain severe blows to the groin area.  Locally known as ‘Tie Dang Gong’, iron crotch qigong is a secret Daoist technique taught to only the most trusted disciples. Once mastered, it is believed to make a man invincible in the battle field.

The exact technique is still largely unknown; it has been carefully guarded for fear of misuse and only passed on from teacher to student in utmost confidence. A few rare photographs show masters using their crotch to lift heavy weights. Some of them can be seen taking hard kicks and hammer-blows to their privates without batting an eyelid.

According to Daoists, when a man’s genitals are strong, he is also strong. Mastering iron crotch qigong is believed to have several benefits – it strengthens the immune system, increases energy levels and even enhances potency. But before a student can attempt to lift weights, he needs to master the qigong technique of sending the blood and the qi to a particular part of the body or to a particular acupoint by guiding it with his mind.

So iron crotch qigong is taught in two parts – the first part deals with meditation, and massage to strengthen the kidney and the back. Daoists believe that the key to strong genitals begins with the kidneys. The second part of the training prepares a student to lift weights, again, with special meditation techniques and massages. The lifting begins with smaller weights, which are increased as the student advances. Most novice students are able to lift at least 50 lbs after a basic Qigong course.

We aren’t sure where Zhou learned the technique of iron crotch qigong, but he prefers to train at a park because he wants to share his knowledge with other men. “I’m hoping that by teaching this method, I can bring health to others,” he said. He tried auditioning for China’s Got Talent three years ago, but the judges found his act too painful to watch. He’s got plenty of fans at the park though, who keep returning to watch his act and cheer him on.